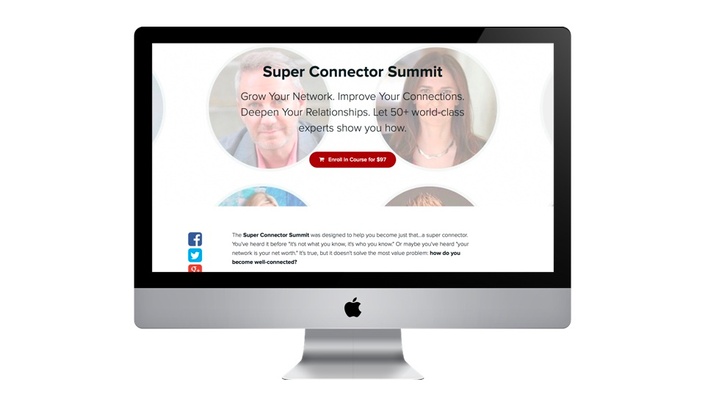 Grow Your Network. Improve Your Connections. Deepen Your Relationships. Let 50+ world-class experts show you how.

The Super Connector Summit was designed to help you become just that...a super connector. You've heard it before "it's not what you know, it's who you know." Or maybe you've heard "your network is your net worth." It's true, but it doesn't solve the most value problem: how do you become well-connected?

The best networkers are super connectors, people with large networks yes...but also people who use their contacts to make others lives and career better by making connections for them. All of the experts in this summit are super connectors in their fields. They've benefited from cultivating a powerful network...and others have benefits to.

Now it's your turn.

This is just a bunch of folks giving you advice. Each speaker will share the powerful strategies that helped them grow their network, improve their connections, and strengthen their relationships...and and the proven tactics that you can applied to find similar success. The insights on this summit can change how you work for the better... One of the world’s leading business thinkers, David Burkus’ forward-thinking ideas and bestselling books are helping leaders and teams do their best work ever.

He is the best-selling author of five books about business and leadership including the forthcoming Leading From Anywhere. His books have won multiple awards and have been translated into dozens of languages. His insights on leadership and teamwork have been featured in the Wall Street Journal, Harvard Business Review, USAToday, Fast Company, the Financial Times, Bloomberg BusinessWeek, CNN, the BBC, NPR, and CBS This Morning. Since 2017, Burkus has been ranked as one of the world’s top business thought leaders by Thinkers50. As a sought-after international speaker, his TED Talk has been viewed over 2 million times. He’s worked with leaders from organizations across all industries including Google, Stryker, Fidelity, Viacom, and even the US Naval Academy.

A former business school professor, Burkus holds a master’s degree in organizational psychology from the University of Oklahoma, and a doctorate in strategic leadership from Regent University.

When does the course start and finish?
The course starts now and never ends! It is a completely self-paced online course - you decide when you start and when you finish.
How long do I have access to the course?
How does lifetime access sound? After enrolling, you have unlimited access to this course for as long as you like - across any and all devices you own.
What if I am unhappy with the course?
We would never want you to be unhappy! If you are unsatisfied with your purchase, contact us in the first 30 days and we will give you a full refund.
off original price!